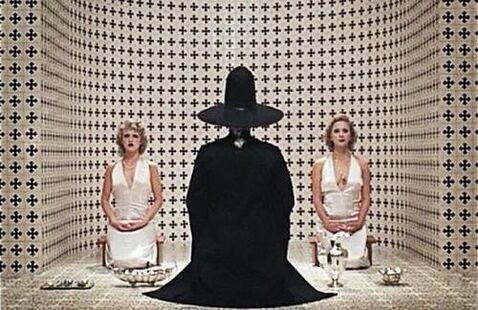 Nayib Estefan has been exhibiting films in Miami since 2010. He created Shirley’s Cinema in the backroom of Gramps Bar in Wynwood, then launched two successful Saturday midnight screening series, one for the Coral Gables Art Cinema and one for O Cinema. He was asked by Gucci to create one a pop-up cinema in Milan in 2019. He currently owns and operates the Nite Owl Drive-in, which has been operating in downtown Miami since 2019.

Chilean filmmaker Alejandro Jodorowsky’s follow-up to his debut “El Topo” (1970), which played in theaters for six months (and is widely considered to be the first midnight movie), ‘The Holy Mountain” was financed in part by John Lennon and Yoko Ono and produced by Beatles manager Allen Klein.

The film premiered at the 1973 Cannes Film Festival and had an even longer run than “El Topo” at midnight screenings, playing for 16 months in New York City.

The surreal fantasy stars Jodorowsky as an alchemist who takes on a thief as his apprentice. The alchemist introduces the apprentice to seven people who will help him fulfill his desire to travel to Heaven.

Defying a traditional narrative structure (Jodorowsky took LSD during the filming and fed his actors mushrooms), the film centers on a trip by the group to a holy mountain that supposedly unites heaven and earth. The film’s final image is one of the earliest examples of a director obliterating the fourth wall and addressing the audience directly.

“A scandal when first released, Mr. Jodorowsky’s movie is a dazzling, rambling, often incoherent satire on consumerism, militarism and the exploitation of third world cultures by the West. It unfurls like a hallucinogenic daydream, which is to be expected, considering that it’s the follow-up to Mr. Jodorowsky’s midnight movie “El Topo.” – Matt Zoller Seitz, The New York Times

Tickets are $10 plus tax for the general public, free to UM students with Cane Cards. Registration is required at the link above.