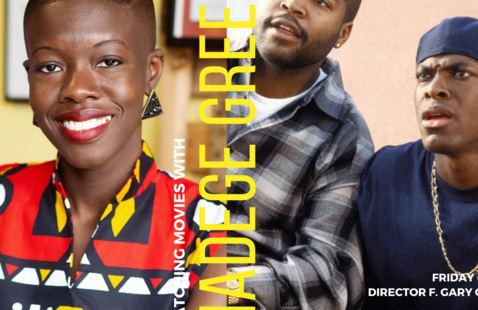 Bill Cosford Cinema, Dooly 225 View map Free Event
Add to calendar
Save to Google Calendar Save to iCal Save to Outlook

https://cosfordcinema.com/event/watching-movies-with-nadege-green-friday-1995/
View map Free Event
Add to calendar
Save to Google Calendar Save to iCal Save to Outlook

Join Nadege Green and Bill Cosford Cinema manager Rene Rodriguez for a free screening and discussion of the 1995 comedy 'Friday.'

Nadege Green is a writer, researcher and audio producer. She is the founder and leader of Black Miami Dade, an emerging online digital platform that resists the erasure of Miami-Dade's Black past. She is also the editor of the final installment in "The Miami Trilogy," a three-book project exploring contemporary Miami. This edition will center on community narratives around gun violence in Miami-Dade including essays, poems, photos and illustrations by local residents. She is also a contributor to NPR/WLRN radio.

It is Friday and Craig Jones (Ice Cube, in his first comedic role) is unemployed, having been fired the previous day. This leads to trouble with Smokey's (Chris Tucker's) supplier, Big Worm (Faizon Love), who now wants his money, or his product back, or Smokey is a dead man. Then there's Deebo (Tommy "Tiny" Lister, Jr.), the local bully, plus Craig's jealous, psychotic girlfriend, Joi (Paula Jai Parker), and Debbie (Nia Long), the neighbor Craig has a crush on. A lot can happen while lounging around your house on a Friday.

"It's just a typical summer day on a residential street: Kids are playing, lawns are being watered, there's a lot going on but not much happening. And that's exactly the point: co-screenwriters Ice Cube, DJ Pooh, and director F. Gary Gray find as much humor in well-observed detail as in the oddities of the film's world.

"There are slapstick gags, bathroom humor (both figuratively and literally), a lot of jokes about hairstyles and sight gags based on ridiculous juxtapositions, like the huge Deebo riding a little bike. All the inaction is set to a terrific, evocative soundtrack that mixes 1960s soul and Motown classics, Rose Royce's "I Wanna Get Next to You" from CAR WASH, rap from Cypress Hill and Cube, and Dr. Dre's hit "Keep Their Heads Ringin'." -- TV GUIDE

Admission is free but registration required at link above.