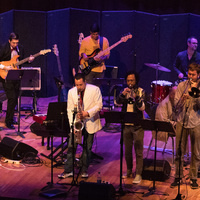 (this is a past event)

With Dave Liebman and Charles Pillow.

Join the Frost Sextet and the Frost Concert Jazz Band as they revisit music from Miles Davis’s audacious Bitches Brew, released in 1970, reimagined in new arrangements by saxophonist Charles Pillow. As part of his residency at Frost, NEA Jazz Master saxophonist Dave Liebman, a Miles Davis sideman, performs with both Frost groups.

This event content is powered by the Localist Community Event Platform.

Login to University of Miami

If you do not have a CaneID, please login using one of the social options below to interact with events, personalize your calendar, and get recommendations.

If you do not have a CaneID nor a social login, please login with your email address below.