Stanford Online Lecture: What if Black Women Have Always Been the Vanguard of Voting Rights? 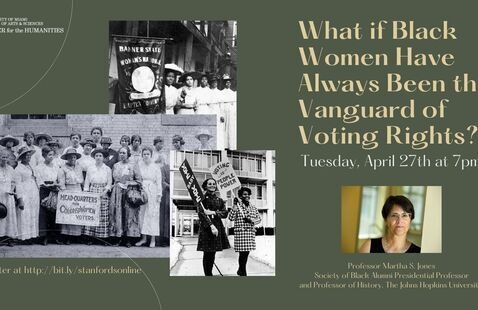 When we appreciate what an open secret Black women’s disenfranchisement was in 1920, the facts of the 19th Amendment fit awkwardly with events that feature light shows, period costumes, and marching bands. Members of Congress who promulgated the 19th Amendment, state lawmakers who ratified it, and suffragists themselves all understood that nothing in its terms prohibited states from strategically using poll taxes, literacy tests, and understanding tests to keep Black women from registering to vote. Nothing in the new amendment promised to curb the intimidation and violence that threatened Black women who came out to polling places.  Indeed, as Professor Martha Jones points out, voting rights and voter suppression went hand in hand in 1920. When it comes to the story of women’s suffrage and the 19th Amendment, two myths dominate. The first is that when the Amendment became law, all American women won the vote. We even hear that women were thereby guaranteed the vote. The second myth is that, on the contrary, no Black American women gained the vote in 1920. Racism kept Black women from the polls. It is time to replace myths with history.

Martha S. Jones is the Society of Black Alumni Presidential Professor, Professor of History, and a Professor at the SNF Agora Institute at The Johns Hopkins University. She is a legal and cultural historian whose work examines how black Americans have shaped the story of American democracy.  She is author of Vanguard: How Black Women Broke Barriers, Won the Vote, and Insisted on Equality for All (2020), selected as one of Time's 100 must-read books for 2020.  Her 2018 book, Birthright Citizens: A History of Race and Rights in Antebellum America (2018) won numerous awards including the Organization of American Historians Liberty Legacy Award and the American Historical Association Littleton-Griswold Prize, and the American Society for Legal History John Phillip Reid book award.

Professor Jones holds a Ph.D. in history from Columbia University and a J.D. from the CUNY School of Law, which bestowed upon her the degree of Doctor of Laws honoris causa in 2019. Prior to her academic career, she was a public interest litigator in New York City, recognized for her work a Charles H. Revson Fellow on the Future of the City of New York at Columbia University.  She is an immediate past co-president of the Berkshire Conference of Women Historians, and today serves on the boards of the Society of American Historians, the National Women's History Museum, the US Capitol Historical Society, the Johns Hopkins University Press, the Journal of African American History and Slavery & Abolition.