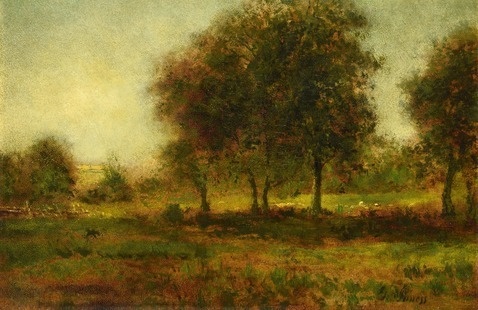 To celebrate the opening of American Impressionism: Treasures from the Daywood Collection (November 18, 2021 - February 13, 2022) at the Lowe Art Museum, scholars Keri Watson and Keidra Daniels Navaroli will discuss paintings from the exhibition in relation to their forthcoming book This is America: Re-viewing the Art of the United States (Oxford Press, 2022). Their book prioritizes underrepresented stories through the inclusion of marginalized makers (African American, Native American, LatinX, Asian American, LGBTQIA+, and People with Disabilities, etc.), diverse media (textiles, fashion, ceramics, etc.), and vast geographic regions (Alaska, the Caribbean, and Pacific territories). Breakout sections called “Contemporary Connections” feature work made by contemporary artists that illustrates the dynamic visual dialogue contemporary artists have with the past. Their presentation, “Re-viewing American Impressionism: Images of the Changing Landscape,” focuses on select works from the exhibition and pairs them with contemporary artworks to reveal the complexities of the later nineteenth century.

Keri Watson is the Director of the Florida Prison Education Project, Associate Professor of Art History, and affiliated faculty in the Florida Studies, Women's and Gender Studies, and Texts and Technology Ph.D. programs at the University of Central Florida. She teaches upper-level courses in 19th-, 20th-Century, and American Art, as well as special topics courses: The Art of Walt Disney, Southern Folk Arts, and African American Art. Dr. Watson's research, which focuses on the power of art to contribute to and challenge stereotypical representations of race, nationality, gender, sex, and dis/ability, has been recognized and supported by the National Endowment for the Arts, Institute of Museum and Library Services, Association of American Colleges and Universities, Fulbright-Terra Foundation, Southeastern College Art Conference, Society for the Preservation of American Modernists, and the Laughing Gull Foundation.

Keidra Daniels Navaroli is a McKnight Doctoral Fellow in the Texts and Technology Ph.D. Program at the University of Central Florida. She is the former assistant director and curator of the Ruth Funk Center for Textile Arts at Florida Institute of Technology (Florida Tech), where she was responsible for overseeing daily operations; organizing exhibitions and exhibition-related programs; and working with other university units and public organizations to promote collaborative, interdisciplinary projects. Her research focuses on addressing how textiles – a familiar, yet dynamic medium – can be utilized to question cultural divisions, foster intergenerational dialogue, and enhance the understanding of traditionally-underrepresented communities. Navaroli received her M.A. in the History and Criticism of Art from Florida State University; completed internships with the Metropolitan Museum of Art and Sotheby’s Auction House in New York; and is an alumna of the Museum Leadership Institute’s NextGen Program. Recently, she was selected as a Constellation Leader for POLARIS: The Museum Mentor Network and is currently serving as a board member for the Association of Academic Museums and Galleries.

Christina Larson is the Assistant Director of the University of Miami Center for the Humanities, which she joined in September 2021. In her previous post at the University of Miami, she served as the Andrew W. Mellon Fellow in Academic Engagement in November 2017. In this role, she worked closely with her colleagues at the Lowe Art Museum and University of Miami Libraries to promote the cultural resources of artwork, artifacts, and archives for teaching, learning, and research purposes for faculty and students. Larson has also overseen the Andrew W. Mellon CREATE Grants Program create.miami.edu that supported 25 faculty projects with these collections.

Drawn from the acclaimed collection of the Huntington Museum of Art, American Impressionism: Treasures from the Daywood Collection features 41 extraordinary paintings originally from the private collection of Arthur Dayton and Ruth Woods Dayton. The Daytons (whose family surnames combine to form “Daywood”) were prominent art patrons in early 20th century West Virginia who acquired over 200 works, 80 of which were oil paintings. Active at a time when art patronage played a major foundational role in the growth of many museum collections, the Daytons sought to preserve and share artworks that they felt captured the essence of American life.

This exhibition showcases work from a transitional time in American art, approximately the late 19th and early 20th centuries, when artists abandoned the rigors of academic styles and subjects. They turned instead to intimate scenes of the cultivated countryside and figure studies of friends and neighbors that reflected the more modern influences of the Barbizon School, Impressionism, and Post-Impressionism. Robert Henri, George Inness, George Luks, Homer Dodge Martin, Gari Melchers, John Sloan, John Twachtman, and J. Alden Weir are among the notable artists featured in the exhibition, which serves as a luminous window into one couple’s seminal experience in the world of art patronage.

This exhibition was curated by Christopher Hatten, Senior Curator at the Huntington Museum of Art in Huntington, West Virginia.