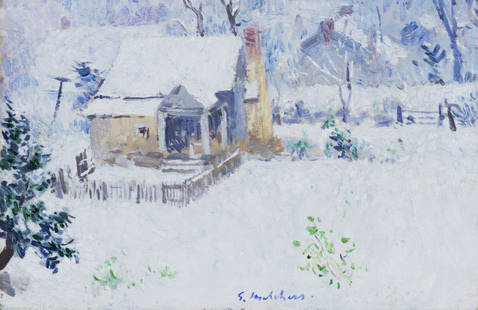 Join the Lowe for a virtual talk with Joanna Catron. As an American painter Gari Melchers (1860-1932) was one of the greatest commercial and critical successes of his day, and yet his reputation has failed to endure. In recounting Melchers’ story, Catron uncovers the contradictions and complexities of his art, helping to explain why he was so undervalued in the half century after his death and providing a true assessment of his important place in American painting.

Joanna Catron earned a B.A. in art history from Mary Washington College and an M.A. in art history with a concentration in museum training from George Washington University. She has served as curator of Gari Melchers Home and Studio in Falmouth, Virginia, since 1983, assuming the additional role of assistant director in 2018. She is the author of several articles on Melchers and his home and studio at Belmont; has been a contributing writer to numerous exhibition catalogs; and is a lecturer on the topics of Gari Melchers, American painting of the late-19th century, and the art market and craft of the forger. Regarded as the world's leading authority on Gari Melchers, she is compiling a catalogue raisonne on the artist - and is regularly called upon to authenticate his works.

This is a free event, thanks to the generosity of our supporters. If you would like to make a tax-deductible donation to ensure that we can offer future programs at no cost to the general public, you may do so by clicking the link below. No matter the size, every gift helps, and every gift gratefully appreciated. Thank you!

Link to the donation page https://development.miami.edu/page.aspx?pid=375