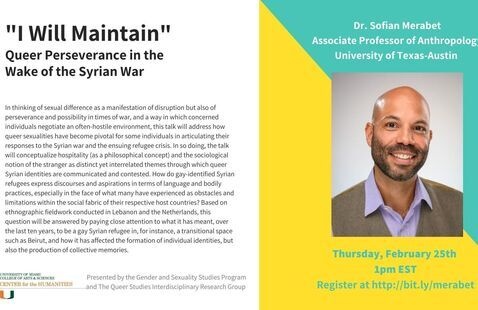 The Gender and Sexuality Studies Program and the Queer Studies Interdisciplinary Research Group will host a discussion with Sofian Merabet: " 'I Will Maintain': Queer Perseverance in the Wake of the Syrian War.

In thinking of sexual difference as a manifestation of disruption but also of perseverance and possibility in times of war, and a way in which concerned individuals negotiate an often-hostile environment, this talk will address how queer sexualities have become pivotal for some individuals in articulating their responses to the Syrian war and the ensuing refugee crisis. In so doing, the talk will conceptualize hospitality (as a philosophical concept) and the sociological notion of the stranger as distinct yet interrelated themes through which queer Syrian identities are communicated and contested. How do gay-identified Syrian refugees express discourses and aspirations in terms of language and bodily practices, especially in the face of what many have experienced as obstacles and limitations within the social fabric of their respective host countries? Based on ethnographic fieldwork conducted in Lebanon and the Netherlands, this question will be answered by paying close attention to what it has meant, over the last ten years, to be a gay Syrian refugee in, for instance, a transitional space such as Beirut, and how it has affected the formation of individual identities, but also the production of collective memories.

Sofian Merabet is a socio-cultural anthropologist with an expertise in the modern Middle East (with a focus on Lebanon and Syria) and the wider Muslim world, including Muslim immigrant communities in Europe and the Arab Diaspora in South America (especially Argentina and Mexico). His interdisciplinary research analyzes the human geography of queer identity formations and the social production of queer space as constitutive features of wider class, religious, and gender relations. His professional interests draw on comparative methodologies and approaches ranging from religious and cultural history to the politics of sexuality.