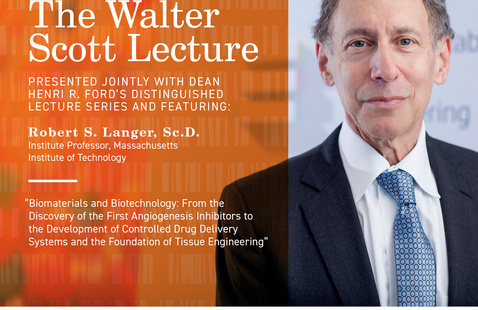 organized by the Department of Biochemistry and Molecular Biology

“Biomaterials and Biotechnology: From the Discovery of the First Angiogenesis Inhibitors to the Development of Controlled Drug Delivery Systems and the Foundation of Tissue Engineering“

Advanced drug delivery systems are having an enormous impact on human health. We start by discussing our early research on developing the first controlled release systems for macromolecules and the isolation of angiogenesis inhibitors and how these led to numerous new therapies. This early research then led to new drug delivery technologies including nanoparticles and nanotechnology that are now being studied for use in treating cancer, many other illnesses, and in vaccine delivery (including the Covid-19 vaccine). We will also discuss approaches using materials and cells to create new tissues and organs, and also organs on a chip.