Frost Orchestras—The Bourgeois and the Emperor 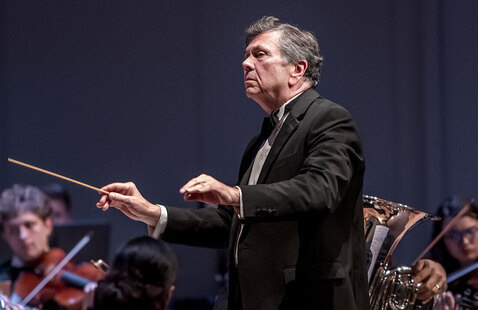 The prestigious members of the Frost School of Music faculty, multi Emmy award winner, and GRAMMY nominee Gerard Schwarz will conduct the Frost Symphony Orchestra with special guest soloist Santiago Rodriguez, hailed as “one of the finest pianists in the world” by the Baltimore Sun.  The live concert from the 600-seat capacity Gusman Concert Hall will be broadcast free, virtually to the public on YouTube in keeping with the school’s policy since the pandemic began.

Opening the program is the Frost Chamber Orchestra conducted by Maestro Schwarz performing suites from the 20th century by master composers Maurice Ravel and Richard Strauss.  Ravel originally composed “Ma Mère l’oye” (Mother Goose) in 1908 and 1910 as a suite of four-hand piano pieces written for children of his friends Ida and Cipa Godebski. The suite has five movements—La pavane de la Belle au bois dormant was written in 1908 as Ravel’s father was dying and the other four movements were written in April 1910 with the premiere only days later. Richard Stauss’ Le Bourgeois Gentihomme suite was one of his own favorite scores, an absolute jewel of incidental music written for Moliere’s play of the same name that combines the composer’s romanticism with his love of the Baroque music.

The concert’s second half features The Frost Symphony Orchestra conducted by Maestro Schwarz performing  Ludwig Von Beethoven’s  The Leonore Overture No. 3.   One of the most popular orchestral showpieces, it is the most frequently programmed of the overtures Beethoven composed. Soloist Santiago Rodriguez will join the orchestra on piano for Beethoven’s Concerto No. 5, in E♭ major, Op. 73.  Popularly known as the Emperor Concerto, it was his last completed piano concerto. It was written between 1809 and 1811 in Vienna and was dedicated to Archduke Rudolf, Beethoven's patron, and pupil.