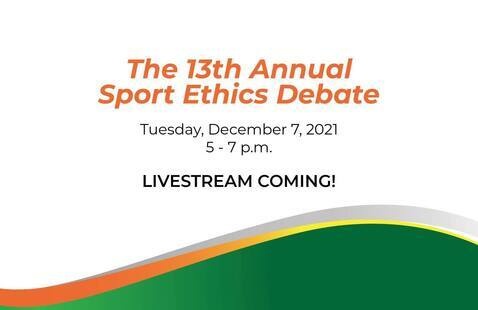 The annual Sport Ethics Debate brings together students from the “Ethical Decision Making in Sport and the Professions” (KIN 606) course in the Sport Administration program to host and participate in the annual event directed by Professor Sue Mullane, Ph.D. The debate explores current topical issues in sport ethics and its goal is for students to take the concepts and theories learned in class and apply them to real-world situations This year’s graduate class of 41 students was exceptionally large, and the students were divided into eight teams, instead of the usual four. A preliminary round of debates was then held so that four teams could advance to the final event. Additional judges were added, and the students worked on seven cases instead of the usual five. All teams have continued to be active in researching and preparing for the event.

The debate has garnered attention from the alumni community and some notable professionals in the sports industry and has included such topics as athletes and activism, genetic enhancement in sports, extreme sports, youth and high school sports, NCAA, NFL, and other governance issues. This year, esports and sport gambling have been added, among others.